Javascript at the command-line

← back to Creative Computing

In this tutorial, I’m going to teach you a little bit about Node.js. Node.js is a version of Javascript that you can use in places other than a web browser. Programmers often use Node to write software like web servers or web APIs, or other kinds of software that don’t need to be interactive in real time or present sophisticated user interfaces (so-called “back-end” or “systems” programming).

The goal of the tutorial isn’t to make you a Node expert, but to give you an overview of the basics so that you have the literacy you need to dig deeper on your own.

The examples for this tutorial are here.

Both Node and p5.js are programming frameworks that make use of Javascript. But that’s where the resemblance between the two ends. The p5.js framework is for writing interactive applications that run in the browser; Node is for writing back-end applications that run directly as programs on any computer, without the aid of a browser. When you’re writing programs in Node, you’re still writing Javascript, but you won’t have access to any variables, functions or libraries that are specific to p5.js. (Basically, anything listed here.)

Programs written for Node and programs written for p5.js are also different structurally. Most of the p5.js programs we’ve written have two phases: a “setup” phase, for loading resources, initializing variables, etc., and a “draw” phase, which runs over and over again, drawing shapes to the screen and reacting to user input. Node programs, by default, work differently: there’s no “draw” function that gets called over and over again. The statements you write are executed one at a time until there are none left and the program exits. (Though see the web server example below for an important exception to this!)

Another important difference between p5.js and Node is how you write and run programs. We’ve been using the p5.js editor to write p5.js programs, and then distributing them to others by uploading them to the web. When writing Node programs, you’ll use a text editor like TextWrangler or Sublime Text to write the programs, and then run them from the command line using the Terminal application (assuming you’re using OS X). I’ll explain more about this below!

Go to nodejs.org and follow the instructions for your platform.

Open the Terminal application. (You’ll find this in Applications > Utilities, or you can search for “Terminal” using Spotlight.) The Terminal application displays what’s known as the “command line”; think of this as sort of a low-level interface to your computer, where instead of moving your mouse around and clicking on things, you type commands directly. In this tutorial, we’re only going to use a handful of commands—don’t worry, the command line looks intimidating, but there’s not much to it if you’re just running Node programs.

When you first start the Terminal application, you’ll see a prompt (usually ending with a $) and then a cursor. Your job is to type a command, which will cause your computer to run a particular program on your computer. Sometimes those programs will run instantaneously; sometimes they’ll “take over” the Terminal window for a while and wait for further input.

The first program you’re going to run what’s called the Node REPL. “REPL” stands for “read-evaluate-print-loop”; it’s a special interface to Node that allows you to type Javascript expressions and see the result of evaluating those expressions. To run the REPL, just type node at the command line. You’ll see a new prompt appear—this time, a > instead of a $. As long as the prompt is >, you can type Javascript expressions and see what they evaluate to (sort of like a calculator). To exit the REPL, type .quit and press Enter, or hit Ctrl+D. 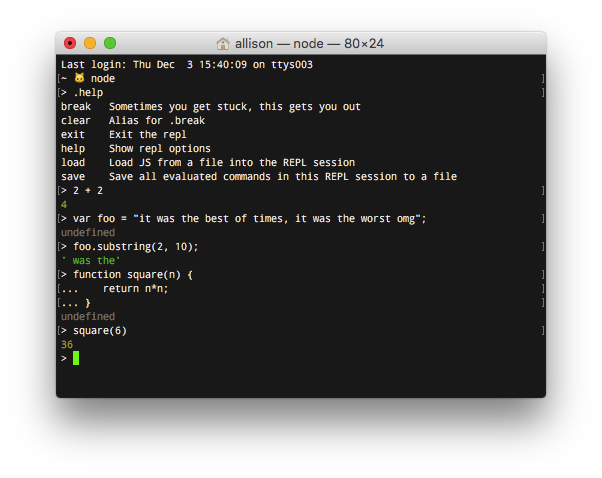 A Node program consists of a series of Javascript statements. You can create a Node program using a text editor like TextWrangler or Sublime Text.

Copy the following into a text editor and save it somewhere as hello.js. (You probably want to save it into a new, empty folder.)

To run the program, type node followed by the filename of the program (in this case, hello.js. You should see something that looks like this:

Here’s documentation on all of the modules included with Node.

NPM is the global repository for Node modules. Node modules are code libraries that provide pre-built functionality that you can re-use in your own Node programs. Modules are contributed by thousands of programmers from across the world. Installing any of these modules is as easy as typing a few words on the command line. It is pretty great!

Create a project with npm init

Before you can install modules from npm, you’ll probably want to create a package.json file. This is a special configuration file that holds information about your project—and, importantly, a list of the modules that you’ve installed as part of the project. The easiest way to create a package.json file is to type the following on the command line:

The default package.json file produced like this is fine, but you’ll eventually want to customize its contents. This is a good resource for learning what the different parts of the file mean.

To install a module, locate the desired module on npm and remember its name. Then type

… on the command line in your project directory, replacing <module_name> with the name of the module you want to install. For the next few examples, we’re going to use the npm module supplied by RiTaJS, which you can install like so:

After doing this, examine the package.json file. You’ll see that it’s been updated with a dependencies key that lists the rita library you’ve just installed. You’ll also notice a new node_modules directory; npm creates this automatically to store and manage all of the modules that you’ve installed. (Don’t mess with this!)

Installing all dependencies for a project

Deploying to ~the cloud~